This post and giveaway is in collaboration with Disney and Jedis everywhere!

Star Wars Rebels: Complete Season Three  delivers all 22 action-packed episodes of the hit CG animated series’ second season, plus exclusive, never-before-seen bonus material on DVD and Blu-ray! This thrilling continuation of the Star Wars Rebels saga depicts the continued efforts of the crew of the starship Ghost to defeat the evil Empire. This season connects to STAR WARS THE CLONE WARS, ROGUE ONE, and of course the original STAR WARS trilogy!  Already available in stores now! 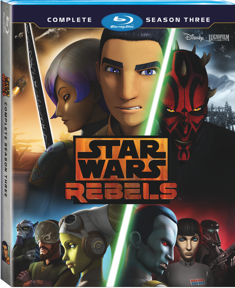 Star Wars Rebels is a great and adventurous series that will attract all ages (we think 8 and up).   It's a big hit in our house!

·         Return To Mandalore
Explore where Mandalore fits within the Empire’s regime – and whether Sabine can unite her people against the Imperial forces.

·         Thrawn: A Legend Reborn
Learn Thrawn’s significance in Star Wars lore, and what the future may hold for this memorable villain.

·         Apprentices to Outcasts: Kenobi And Maul
Track two adversaries who’ve clashed throughout Star Wars history, and find out why the time was right to conclude their story.

·         The Original Rebel: Saw Gerrera Returns – Extended
Meet the Original Rebel. This exclusive extended version features Forest Whitaker discussing the character he brings to life in both Rebels and Rogue One.

We have one copy of Star Wars Rebels Season Three Blu-Ray.  US only please. Prize is shipped by manufacture.  We are not responsible if your kiddo gets up in the middle of it and decides he / she's going to be a Jedi!  That's all you.


This post is in collaboration with Disney Studios. Opinions are my own.  Yes, my kiddo thinks this is SO awesome and yes, I find myself watching with him instead of doing the dishes! The Amazon link is from Amazon and supports charity Smile to fight GMOs.  This is not sponsored by Disney or any other company.
Email Post
Labels: blu-ray movies Star Wars Star Wars Rebels The Clone Wars
Nicki
Cook, Eat, Travel, Play and Designing Spaces for Kids is Happiness and What I Do Best!

Jackie said…
I would love to win this for my nephew. (Love your comment about not being responsible if he decides to be a Jedi...lol)
September 10, 2017 at 1:35 PM