Disney's John Carter is a hit and in theaters everywhere right now.

My kids absolutely love it, it is according to them:

"It was so funny and I didn't think it would be"

"Woola is theeeee cutest and awesome, he's like a giant salamander, I must, must have one!!

"Can we buy it when it comes out...I don't want to just rent it"

"How is Woola lightening fast when his legs are so short?"


Kids are cute aren't they? 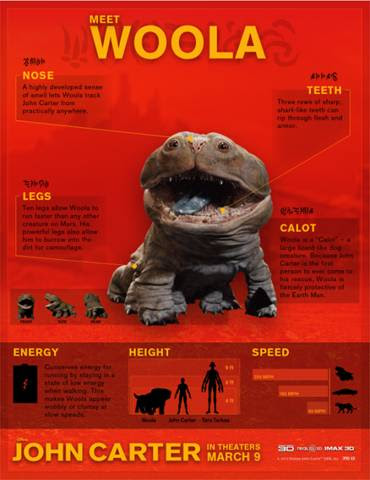 Just know that your children might want to get their own "Mars doggie salamander" after seeing Disney's new movie in theaters now, John Carter!!

Images and information courtesy of Disney Studios
Email Post
Nicki
Cook, Eat, Travel, Play and Designing Spaces for Kids is Happiness and What I Do Best!