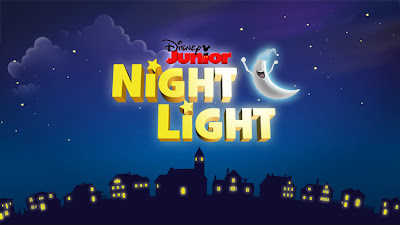 Disney Junior, the brand behind three of cable TV's top five co-viewed series among parents and kids age 2-8, including the #1 series "Doc McStuffins," will launch a nightly block of parent-targeted, kid-friendly short-form programming to air interstitially on the 24-hour channel Disney Junior, beginning TUESDAY, SEPTEMBER 4 (9:00 p.m.-4:00 a.m., ET/PT). Presented under the banner "Disney Junior Night Light," the content is produced by Disney Interactive Family and the block is sponsored by Babble, Disney's leading parenting blog platform.
In keeping with Disney's heritage of storytelling, the emotional connection kids and parents have to Disney characters and stories and Disney's commitment to healthy lifestyles, the Disney Junior short-form series include: "DJ Tales," featuring cleverly costumed finger puppets acting out kids' versions of classic fairytales and storybook favorites; "Picture This!," a fast-paced series featuring artists and animators creating images of classic and contemporary Disney characters; and "That's Fresh," a cooking show hosted by chef Helen Cavallo who shares inspirational stories of cooking and eating with her own family and simple, healthy recipe ideas for kids and families. "Disney Junior Night Light" shorts in development include a series starring child and family photographer Me Ra Koh sharing her tips and tricks for taking professional-quality photographs, charming vignettes featuring parents sharing the story of the first day they brought their child home and a series that puts stay-at-home dads front and center.

Declan Cash's Mom said…
Disney Junior was the best thing ever for us. It wasn't around when my son was little, but he (now 5) and my daughter (19 months) are both big fans of the show. I'm sure I'll catch Night Light some evening after bath time when the TV gets left on.
August 2, 2012 at 7:10 PM

Nicki said…
Thanks so much, we don't have cable and just stream programs, we like Disney Junior...alot! Can't wait to catch the Night Light programs, love that they are wholesome...the way Disney was intended to be!
August 7, 2012 at 12:00 PM