Woot! To celebrate the autumn season Disney Junior is treating viewers to special Halloween-themed episodes and movies airing every Friday throughout the month of October. 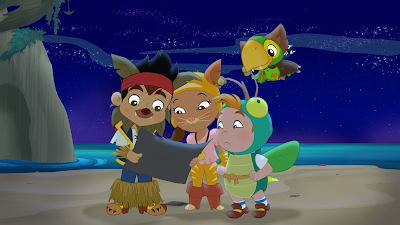 A new Halloween-themed episode of "Jake and the Never Land Pirates" premiering FRIDAY, OCTOBER 5 at 8:30 a.m., ET/PT, where Jake and crew invite Captain Hook to join them as they "Trick and Treasure" throughout Never Land and Izzy dresses up as the Pirate Princess to fool the Sea Witch, who has returned to Never Land to turn the real Pirate Princess into gold.
Emmy Award-winning actress Carol Kane, Tiffani Thiessen and Tori Spelling guest star. 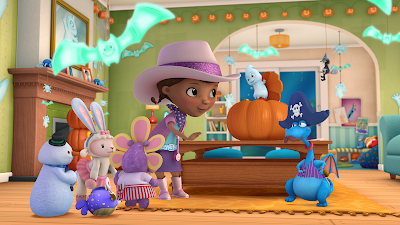 On FRIDAY, OCTOBER 12 at 10:00 a.m., ET/PT, Doc and the toys celebrate Halloween in a new episode of “Doc McStuffins” where Doc helps a pop-up toy ghost overcome his fear of the spooky holiday and diagnoses Donny's toy glow-in-the-dark monster with "No-glow-atosis" and prescribes more time outside in the sun.
Also, beginning WEDNESDAY, SEPTEMBER 19, DisneyJunior.com is inviting families to visit DisneyJunior.com/Halloween where parents can upload videos of their child explaining and acting out what he or she wants to be for Halloween for a chance to be shown on air! The videos will be selected at random and will be shown every Friday on Disney Channel and Disney Junior throughout the month of October. The site will also feature Halloween-themed music videos, games and coloring pages based on favorite Disney Junior series.
Email Post
Labels: dads Disney Channel Disney Junior family fun halloween Jake and the Never Land Pirates kids moms
Nicki
Cook, Eat, Travel, Play and Designing Spaces for Kids is Happiness and What I Do Best!