Thank you for stopping by little island studios, please subscribe by email to follow along in family fun.

Warner Bros. is proud to announce the release of Thunderstruck on DVD and Blu-ray December 4th 2012, along with the Thunderstruck Blog App! 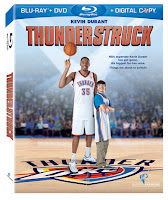 NBA superstar Kevin Durant plays himself in this action-packed family film about a basketball star who switches talent with a klutzy 16-year-old fan. When Brian (Taylor Gray) magically switches basketball skills with his hero, Kevin Durant, he becomes the star of his high school team... while Kevin Durant suddenly can’t make a shot to save his life! But with the playoffs approaching, Brian learns that being a true winner means working hard at your own game, and he tries to make things right in time to prevent a catastrophic end to his hero’s seasoAs always, easy to enter, do one or all:  Giveaway ends December 7th, 4pm PST! Winner has 24 hours to respond to email...yes, really :)  Thank you for entering and good luck!

Leave comment and share your results from the Free-Throw Challenge Game from above Thunderstruck app!  (worth 2 comments)

Tweet up to twice daily (leave 3 comments for EACH tweet) "Enter to win a #ThunderstruckBluRay Combo pack from @littleislandstu http://ow.ly/fGTyK   #kids #moms #dads "

This giveaway is sponsored by PartnersHub and Warner Brothers.  No compensation was given.  Opinions are my own.  Product is shipped to winner by Fed-Ex. Little Island Studios is not responsible for shipping, lost packages or product itself.

carolwegs said…
I subscribe via email. thanks
carolwegs at gmail dot com
December 1, 2012 at 4:43 AM

carolwegs said…
My favorite thing to do on the holiday is get together with family. thanks
carolwegs at gmail dot com
December 1, 2012 at 4:46 AM

carolwegs said…
I like you on facebook as carol wegs
carolwegs at gmail dot com
December 1, 2012 at 4:47 AM

Susie Buetow said…
My fav family holiday tradition is our Family Open House. It gets bigger and better every year. This is our 12 year of doing this. We didn't do it for 2 years (long story) and missed it! We all get involved.
December 7, 2012 at 5:01 AM