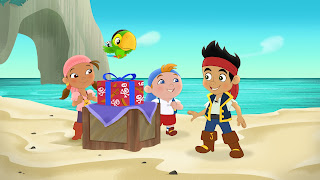 Disney Junior is inviting  Jake and the Never Land Pirates  fans to help celebrate Jake's birthday by submitting videotaped birthday greetings for the chance to appear on Disney Channel and Disney Junior. Beginning Thursday, January 31, parents and caregivers can log on to DisneyJunior.com/JakesBirthday to download a printable birthday card for their child to decorate and showcase in a video submission wishing Jake a happy birthday.

Check out our Happy Birthday Jake!
The videos will be posted on DisneyJunior.com and some will be chosen for air Monday, February 25 – Friday, March 1, leading up to the debut of a new birthday-themed episode of "Jake and the Never Land Pirates" FRIDAY, MARCH 1 on Disney Channel (8:30 a.m., ET/PT) and Disney Junior (5:30 p.m., ET/PT) 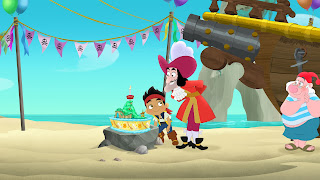 In the new episode - Jake's Birthday Bash, Jake's crewmates Cubby, Izzy and Skully surprise him with a special birthday treasure hunt. The episode will launch on iTunes in conjunction with the television premiere on March 1 as part of the Disney Junior Birthday Bash! bundle which features birthday-themed episodes of additional favorite Disney Junior series including Doc McStuffins and Mickey Mouse Clubhouse.