We have been big fans of the Kingdom Keepers and Peter and The Starcatchers both written and/or co-written by author Ridley Pearson for years!   We are so excited about the new Kingdom Keepers VI: Dark Passage going on sale today!  And now readers also get the chance to help write the seventh and final book in the series via the free Kingdom Keepers Insider app! 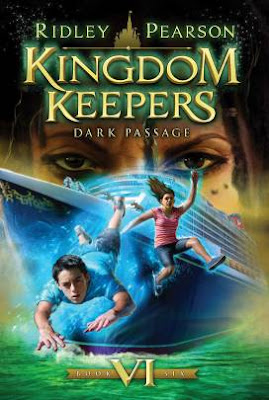 The Kingdom Keepers (young teens who were tapped as models for holographic Disney theme park "guides") and their friends have uncovered a startling truth: Maleficent and the Overtakers (Disney villains) are plotting a catastrophic event that could have repercussions far beyond the world of Disney. Aboard the Disney Cruise Line's inaugural passage through the new Panama Canal, the Keepers and their holograms uncover a puzzle hidden within the pages of a stolen journal. The point of that puzzle will reveal itself in the caves of Aruba, the zip lines of Costa Rica, and the jungles of Mexico. A destructive force, dormant for decades, is about to be unleashed—and the Kingdom Keepers are to be its first victims.

Now, for the first time, readers get the chance to help write the seventh and final book in the series via the Kingdom Keepers Insider app, launching April 2nd! Available on all mobile devices, e-readers and online, the app will provide a groundbreaking interactive fan experience for readers of the Kingdom Keepers series, allowing them to follow along as Ridley Pearson writes, voting on plot points, character involvement, and locations—even contributing ideas for dialogue! Plus, there will be writing contests based on the previous book in the series and judged by Ridley Pearson, promoting writing and literacy in a safe environment with characters readers already know and love! Learn more at www.kingdomkeepersinsider.com.

BOOK TOUR CITIES:
Check it out on your mobile device or online at  www.kingdomkeepersinsider.com.

Information and picture courtesy of Disney.