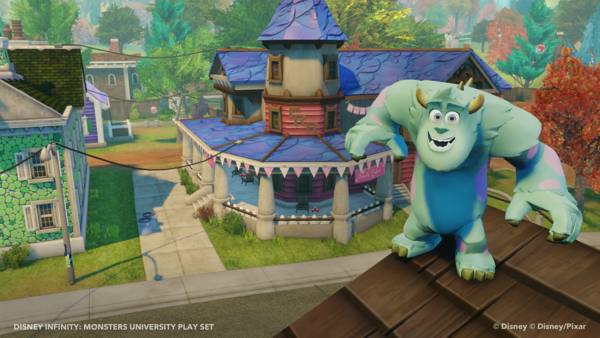 Disney Interactive is providing an in-depth look into the Monsters University Play Set within Disney Infinity through an all new set of character images, action screenshots and a gameplay trailer featuring both Play Set and Toy Box modes. These assets also provide an inside look at the never-before-seen Randy character figure. Monsters University will be part of the Disney Infinity starter pack along with The Incredibles and Pirates of the Caribbean play sets. 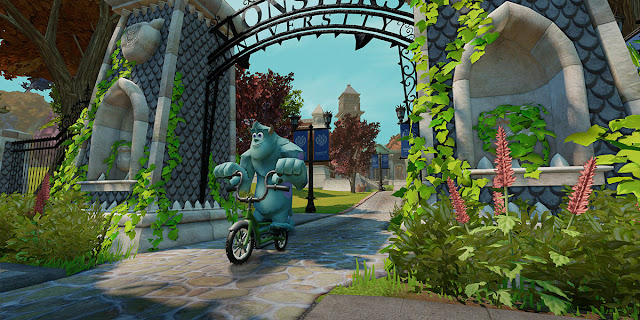 Pranks, Humor and Customization: Players can utilize scare tactics to prank opponents and perfect the art of sneak attacks. They can also customize their own Frat Row buildings with a collection of colors, designs and decorations found throughout the play set. Students in the world come in all shapes and sizes and can be customized with wings, fangs, spikes, tails and other accessories. Bikes can be unlocked to perform stunts, tricks and other speedy maneuvers. 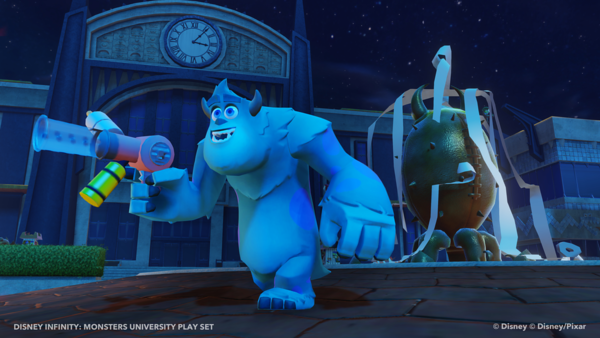 Play Set: The Monsters University play set adds its own specialized game play mechanics and pieces to the Disney Infinity world, including unique gadgets such as the toilet paper launcher, paintball launcher, foam hand and the ability to ride on Archie the Scare Pig. These can also be activated in Toy Box mode which will allow players to create all-new prank challenges, build and customize worlds and much more. 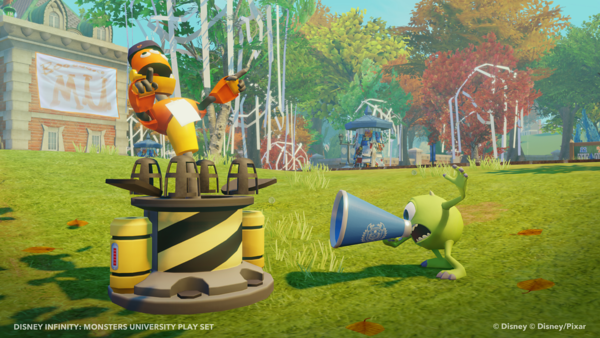 Toy Box mode: The trio of Mike, Sulley and Randy are able to interact with all of the previously revealed Disney Infinity characters from The Incredibles, Pirates of the Caribbean and Cars to create new and exciting adventures in customized worlds.

Within the Monsters University play set, gamers can take on the role of Mike, Sulley or Randy to prank their major rivals at Fear Tech. Avalanche Software worked closely with Pixar to develop the look of Fear Tech’s campus, which makes its debut in the play set. The two universities must compete to see who has the most school spirit during the annual Fear-It Week. Key highlights include:

About Disney Infinity
Disney Infinity is an all-new video game initiative starring the beloved characters from Walt Disney and Pixar Studios’ most popular franchises. Players can place real-world toy versions of their favorite Disney characters onto a device called the Infinity Base and transport them into the virtual game worlds of Monsters University, the Incredibles, Cars and Pirates of the Caribbean, as well as into a giant Toy Box.