Today's post is not sponsored.  We just loved the Teen Beach Movie and think this Summer Jam Event looks like a blast! 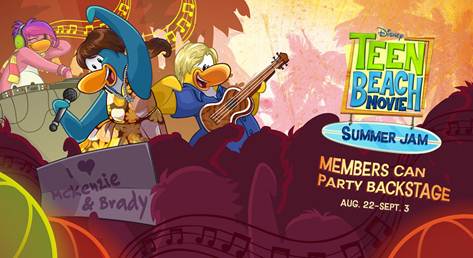 Disney’s Club Penguin is keeping the summer fun flowing with the ultimate summer party - “Teen Beach Movie” Summer Jam event. Club Penguin Island will transform into a surfing and motor-biking paradise from now until September 3rd,  featuring guest performances by penguins inspired by popular "Teen Beach Movie" characters Brady and McKenzie. While they surf the waves and hit the open road, members can dress up like their favorite characters from the film including McKenzie, Brady, Lela, Tanner, Cheechee and more.

While they surf the waves and hit the open road, members can dress up like their favorite characters from the film including McKenzie, Brady, Lela, Tanner, Cheechee and more. Sporting their cool costumes, penguins will be able to chill out by the campfire, play with friends at the beach and even rock out with the penguins inspired by Brady and McKenzie while they perform on stage at the beach hangout in "Teen Beach Movie" Big Momma’s. Members will also have exclusive backstage access to the party and get the chance to receive an exclusive autographed background from the McKenzie and Brady-inspired penguins. 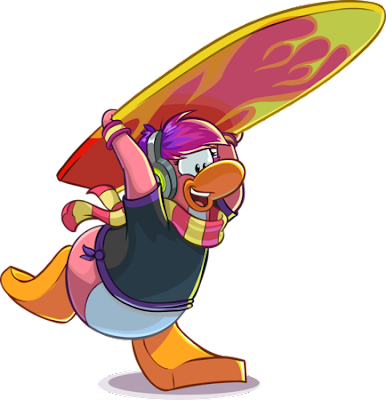 ·         Everyone can chill out with friends at Big Momma’s, make a splash at the Water Park, shoot the curl in Epic Wave and members can become easy riders on the Highway.

·         In tiki shacks hidden around the Island, all players can find and collect seven different beach items like a ukulele, campfire marshmallow, and flower lei to complete their groovy beach attire.

·         Members can get their igloos summer-ready with items like a pool, a diving board, jukebox and a lifeguard chair.

·         Members can receive an exclusive summer igloo by playing in the My Penguin app.

Start the party now at http://www.clubpenguin.com

About Club Penguin
Club Penguin (http://www.clubpenguin.com), is the #1 virtual world for children. Club Penguin works to maintain a fun and safe online entertainment experience by using filtering technology and live moderators. The award-winning virtual world of Club Penguin contains no third-party advertising and is free to use and enjoy, however a subscription membership provides access to additional features that enhance the play experience. Club Penguin, headquartered in Kelowna, British Columbia, Canada, is enjoyed by children around the world, and can be played in English, German, Portuguese, French and Spanish.