When In Georgetown...Eat A Cupcake? 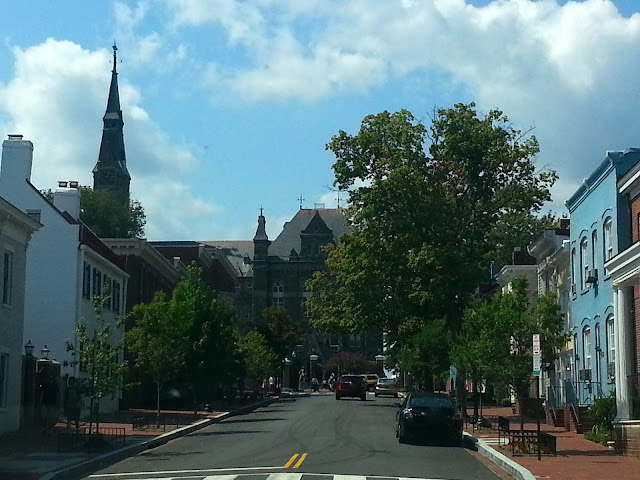 Georgetown is amazing!  If you have not been, I highly recommend it.  It is on my most fun favorite places list.  We go often and whilst walking around with my Dean and Duluca coffee, I came across the longest line I have ever seen coming out of a bakery, or any restaurant for that matter.  Every one there was in line to purchase a cupcake.  I am a foodie, that much is sure and I will travel for spectacular food, but I am not sure about a cupcake line? 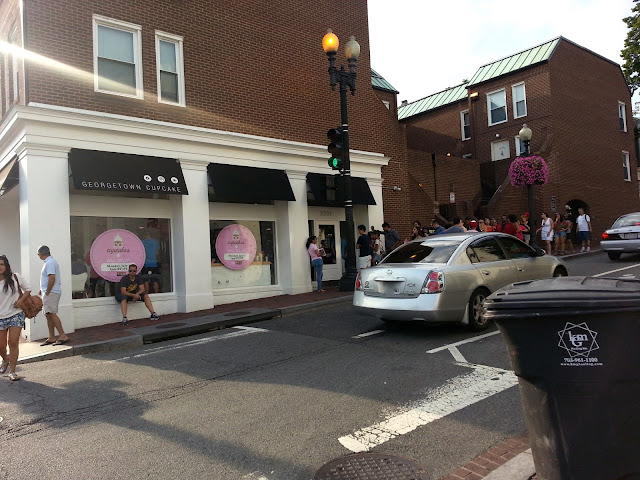 I am, perhaps the only person on the planet who has not heard, seen, been to or eaten at  Georgetown Cupcakes, which is apparently DC Cupcakes on the TLC network.  If you read my blog often, you may recall I watch little commercial TV.  Okay, really, I do not watch any.  I have not had cable in over ten years.  Even whilst traveling this summer and having it available, we do not watch except for an occasional Disney Channel bit.  So there is my excuse for never having heard of DC Cupcakes. 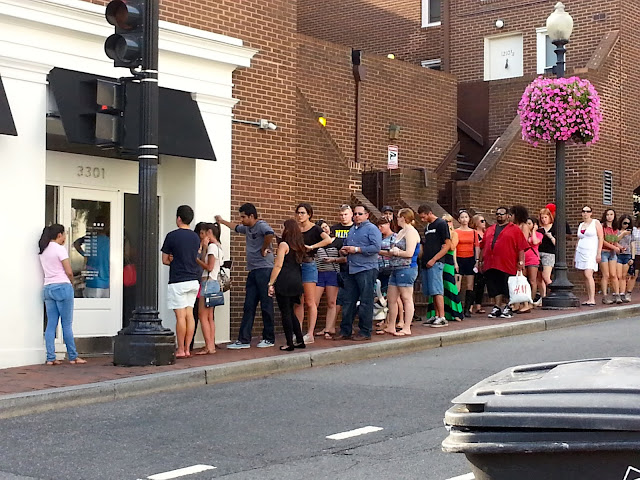 The other day, I had an errand in town with my kids and noticed that there was almost no line at the cupcake shop (mostly because they were about to close).  So, in an effort to be a cool parent, I went.

The shop is super cute and bright but,  honestly, I really just wanted the cute pink boxes I had seen in the window that the cupcakes come in.  I have desired one every since I saw one in the Mrs. Doubtfire movie - that the soccer cake was in.  (I am aware this makes me a total dork nerd geek). 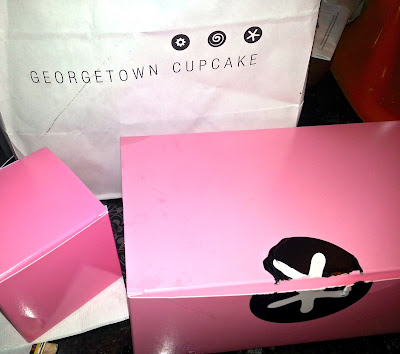 Yes, I waited in a small line for a cupcake, that was not organic.  And I must say, I don't "get it".  Being in the shop, I get that it is clearly a  "thing", the bakery is adorable and sweet (pun intended)  and has a faithful following.  But, no, I really do not understand.  All I could taste was sugar. I really don't use or eat mass amounts of sugar or sweets, so perhaps that was the reason?  They did have Organic Earl Grey Tea and that was delicious! 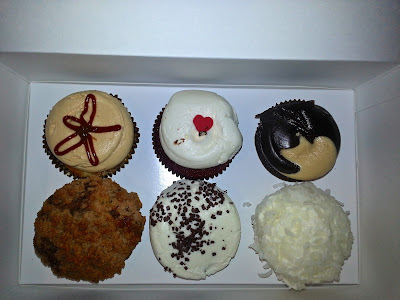 They are quite pretty.

Have you seen Parental Guidance?  With Billy Crystal?  Well, when his grand kids have a "main stream" cake for the first time...well, that is exactly what it was like for my kids.  I had to take them to the playground at nine at night and watch them literally run around in a circle for an hour!  I am not kidding, I have never seen anything like it.  (it was a bit frightening) 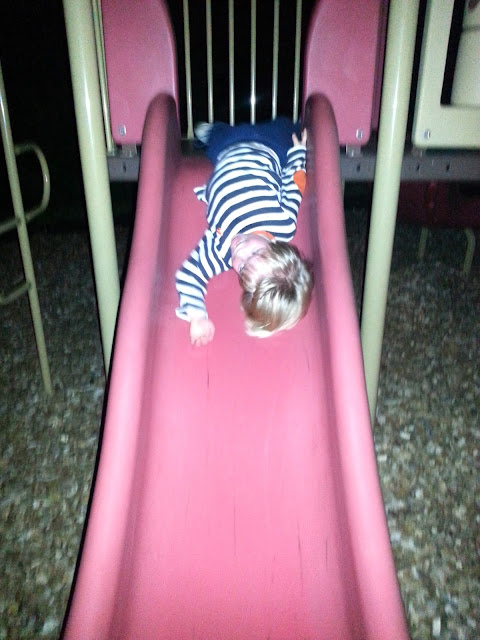 Upside down on a slide at 9 at night is just the thing to lose the sugar rush!

So, I failed at being a cool parent by taking my kids to the Famous TV cupcake bakery and giving my kids a mass sugar rush.  But, by letting them play on the playground in the moonlight listening to laughs out loud and giggles...I think maybe that is pretty cool!

I could not find the ingredients used anywhere on Georgetown Cupcake site.  I called the L.A. location and the employee was absolutely fabulous and let me know they use King Arthur Flour (which I am a HUGE fan of and pure cane sugar (not beet sugar)
and pure butter.    Mostly wonderful stuff...all we need now is an organic cupcake from Georgetown Cupcakes!    And Red Velvet with natural coloring flavor please! :)

I do not watch commercial TV, but very much love movies and streaming from Amazon.

Yes! Rent or watch Parental Guidance it so much fun for the whole family!  (I absolutely love it  and can completely relate to Marisa Tomei's character).  Again, if you read often, I'm sure you are super surprised by that. ;) 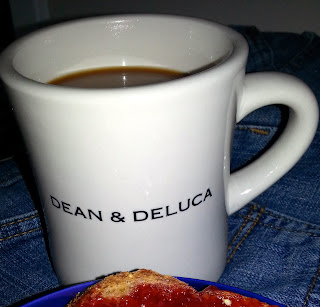 Update:  This post was still in draft, when I was eating out at a cafe this weekend and was discussing cupcakes with a women eating a Georgetown Cupcake she had just picked up.  I knew it was a Georgetown cupcake because of the pretty pink bakery box.  (yes, I am a dork).   She mentioned DC Cupcakes and I said I had been but, wasn't quite sure what the fuss was.  She glared at me and got up and left!   Perhaps it was all the sugar that made her edgy?  I am not sure.  If you are a huge DC Cupcakes fan, before you leave a not nice comment, remember I have never actually seen the show and I am most assured they are absolutely lovely!  :)

Update 2:  Just talked to my mom - I asked her if she had seen a show called DC Cupcakes.  My mom got real excited and asked if I was going and could I send her a cupcakes - in the pretty pink boxes of course.

Update 3:  A lovely of mine is in town and wanted to hang out with me for the day.  I said sure and what would she like to do first.   "Go to DC Cupcakes!" she replied. *sigh* 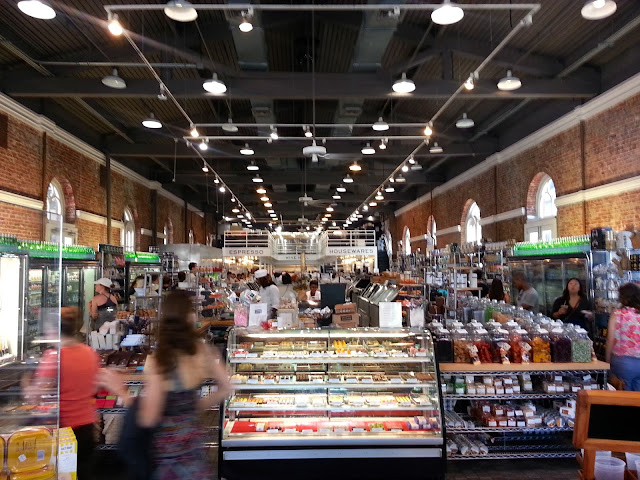 Dean & Deluca in Georgetown.  Bliss.  I am apparently not a Georgetown / DC Cupcake girl, but very much a sushi, coffee and spices girl at Dean and Deluca.


I am wondering if maybe I should not post this to avoid a sugar induced mob of angry women throwing frosty cupcake wrappers at me?  Or perhaps they would throw the adorable pink boxes instead...


No, of course this is in no way a sponsored post.  There are no affiliate links either.

And if Georgetown Cupcakes brings out a line of delicious all organic cupcakes...let me know.  :)

Unknown said…
Keep asking for the organic and hopefully, they will get the hint.

The Quiet Mom said…
What a beautiful place, and those cupcakes are to die for!

Hopping by and following your tweets:) You may also visit Blog Hops Connect (http://brickn.com/bloghops/) to hop for more:)