Get ready for an epic journey to the Alaskan wilderness without leaving home as Disneynature's Bears releases on Blu-ray Combo Pack on August 12th! A portion of first-week sales will be donated to the National Park Foundation as part of the Disney Worldwide Conservation Fund to Protect Wildlife and Wild Places. Bonus features include the music video for "Carry On" featuring Olivia Holt and four making-of featurettes. 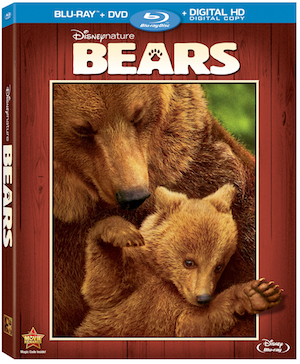 To celebrate the in-home debut of “Bears,” Disneynature is proud to continue the conservation program initiated with the film’s theatrical release. For every purchase of the movie through August 19, 2014, Disneynature will make a donation through the Disney Worldwide Conservation Fund to the National Park Foundation, the official charity of America’s national parks, to further protect and conserve endangered or threatened wildlife and wild places as well as enhance field research across more than 2.9 million acres of National Park Service land.

Blu-ray
·       Welcome To Alaska - Journey with the filmmakers into the Alaskan wilds to film Sky and her cubs.
·       The Future For The Bears - Experience the thrill of living with the bears during production, and the importance of protecting the wilderness to ensure their survival…and our own.
·       A Guide To Living With Bears - Learn how the team interacts safely with these magnificent creatures.
·       How Did They Film That? - Get an inside look on some of the extreme filmmaking that went into getting shots high in the mountains and under frigid cold water.
·       “Carry On” Music Video By Olivia Holt