Today's post is sponsored by the new movie coming out this week - Transformers: Age Of Extinction!

We have been huge Transformers fans since the beginning!  My oldest son has always been the first in line at the theaters to see them and has always been thrilled with each movie.  Transformers:  Age Of Extinction is no different - we cannot wait!  This movie, Age Of Extinction, looks exceptionally awesome - fresh new faces and epic story - it looks to be the quintessential summer blockbuster hit! 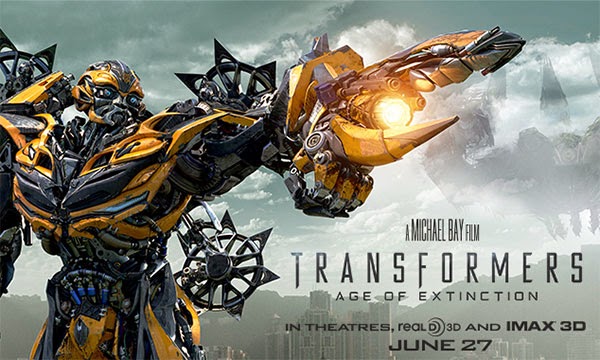 I watched the main movie trailer for Age Of Extinction and it has a whole new cast - Mark Wahlberg, Stanley Tucci (I am a huuuuge Stanley Tucci fan!), Li Bingbing , Kelsey Grammer, Sophia Myles, T. J. Miller, Nicola Peltz, Jack Reynor and Titus Welliver star.  And once again directed by the fabulous Michael Bay. The new Transformer movie looks more exciting than the others combined! Seriously. Did you see the trailer? The Transformer Dinos? That is completely spectacular!


Transformers: Age Of Extinction begins after an epic battle left a great city torn, but with the world saved.  As humanity picks up the pieces, a shadowy group reveals itself in an attempt to control the direction of history…while an ancient, powerful new menace sets Earth in its crosshairs. With help from a new cast of humans (led by Mark Wahlberg), Optimus Prime and the Autobots rise to meet their most fearsome challenge yet.  In an incredible adventure, they are swept up in a war of good and evil, ultimately leading to a climactic battle across the world.


We played with Transformers figures when we were little? Do you remember them? My
little brother had tons of them and we still have some! I think that might make them vintage? I'm not sure, but it definitely makes us a Transformers family!

Transformers: Age of Extinction is in theaters 06.27.14

Are you heading to the opening of Transformers: Age Of Extinction?

This blog post is part of a paid SocialMoms and Paramount Pictures blogging program. The opinions and ideas expressed here are my own.
Email Post
Labels: #TransformersMovie Autobots kids Mark Wahlberg movies Stanley Tucci summer Transformer Transformers Age Of Extinction Transformers Movie
Nicki
Cook, Eat, Travel, Play and Designing Spaces for Kids is Happiness and What I Do Best!