Today's post and giveaway is sponsored by LEGO and DC Comics. 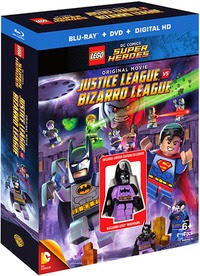 Batman has joined the newly formed Justice League in order to keep tabs on Superman, a mistrust that is complicated by Superman’s clumsy – but well-meaning – clone, Bizarro. Bizarro’s creation of the Bizarro League has caused confusion amongst the world’s greatest Super Heroes, but an even greater and mysterious threat may force the Justice League and Bizarro League to band together to defeat evil.


Superman part of the Bizarro League!


We are giving away a Blu-Ray copy of this new LEGO Super Heroes Original Movie.  If you win this on another blog, you are not eligible to win it here to be fair to everyone who enters.  No P.O. boxes excepted.  Prize is shipped via PR company, we are not responsible for prize or shipping.  US residents only please.


This is a sponsored post.  Opinions are my own.
Email Post
Labels: Bizarro League blu-ray DC Comics Justice League kids Lego Super Heroes Superman
Nicki
Cook, Eat, Travel, Play and Designing Spaces for Kids is Happiness and What I Do Best!