Disney's Aladdin is now out in the Diamond Edition Blu-Ray and it is absolutely spectacular!  Aladdin is a not-to-be-missed classic Disney film.  Robin Williams makes the entire film unforgettable as the genie.  Have your kids seen it yet?  Aladdin was one of my oldest's favorite movies and he still loves it now that he is grown.

For your next family movie night Disney's Aladdin! 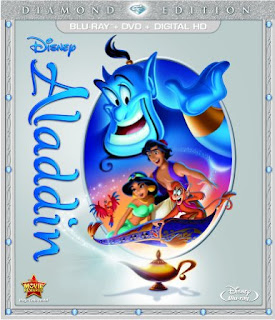 Soar away on a magic carpet ride of nonstop laughs and thrills in one of the most spectacular adventures on all time! Now meticulously restored and enhanced – experience the wonders of “Aladdin” like never before, from the Academy Award®-winning music (Best Music, Original Song for “A Whole New World” and Best Music, Original Score, 1993) to the unforgettable moments of sidesplitting comedy and soaring adventure.


In the heat of an enchanted city, a commoner named Aladdin and his mischievous monkey Abu battle to save the free-spirited Princess Jasmine from the schemes of the evil sorcerer Jafar. Aladdin’s whole life changes with one rub of a magic lamp as a fun-loving, shape-shifting Genie appears and grants him three wishes, setting him on an incredible journey of discovery.

This is a sponsored post with Disney.  Opinions are my own.
Email Post
Labels: Aladdin blu-ray Disney family fun family movie night Kids Movies
Nicki
Cook, Eat, Travel, Play and Designing Spaces for Kids is Happiness and What I Do Best!