Norm Of The North Coming To Blu-Ray!

Lionsgate’s family adventure Norm of the North is heading to Digital HD March 29 and Blu-ray Combo Pack April 19! Follow the adventures of Norm, a polar bear from the Arctic who happens to have some very unusual talents and who has to head outside of his comfort zone to save his home! Norm embarks on a laugh-filled adventure in New York City with his lemming pals as they all try to stop greedy humans from turning the Arctic into a suburban neighborhood, and he makes some new friends along the way. 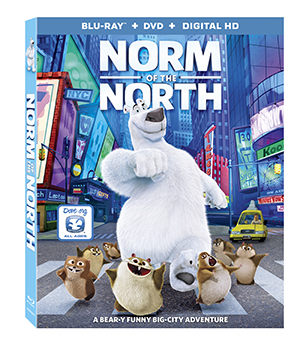 
This new movie is packed with laughs, music, fun characters and heart, Norm of the North is a must-own for the entire family! Bring home this heroic adventure on  Digital HD March 29 and Blu-ray Combo Pack April 19!

Polars Bears are completely the best!

This is a sponsored post with Lionsgate.  Opinions are my own.
Email Post
Labels: family movie night kids Lionsgate movies Norm of the North
Nicki
Cook, Eat, Travel, Play and Designing Spaces for Kids is Happiness and What I Do Best!