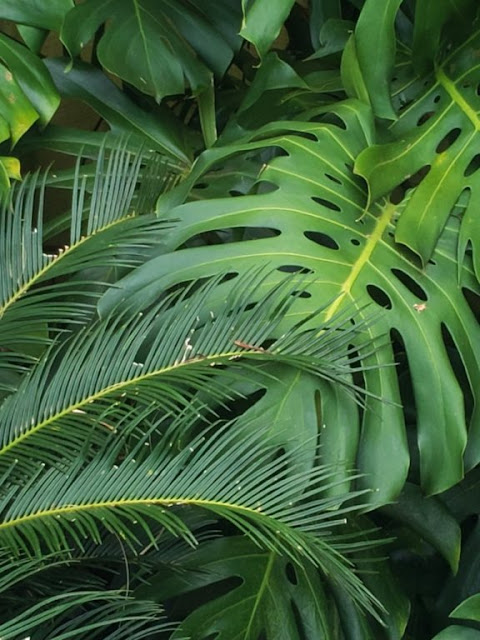 Her grandmother was graceful and strong from the time she could remember.  She
would stop by after school to help her in her yard where her grandmother had more
species of plants then she had ever seen in one place before or even since then.
Giant elephant ears much bigger than she was and made her fantasize of Neverland places of wonder, roses, wild flowers and so many varies that the tropics allowed.  It was a magical place that childhood dreams were made of.

Nana's sewing box was a round tin that was full of threads of many colors, needles, various buttons from over the years and a red tomato pin cushion with a little green leafy material top that she would place the pin needles as she pulled them out of a dress she was finished hemming.  Her grandmother taught her to sew when she was young.  Her first lesson was a pillowcase for her doll.  She remembers to this day poking her finger watching a droplet of blood appear and her grandmother smiling and said she must be doing it right and to not worry.

On special weekends she would escape the hectic household from her family and stay the weekend at her grandmothers.    She would arrive after school to Nana's house smelling of homemade soup and it made her feel so special and warm.  They would laugh together and have soup with baked bread and watch The Dukes of Hazard on TV trays, of which they never did at home and felt a bit rebellious to her.  It was such a treat to sit in front of the TV in her grandmothers little sunroom where the TV placed.   Her grandmother would say wild things like how handsome Bo and Luke were and that she should have dated someone like that.  She found it amusing that her grandmother teased about such things.  She had never ever seen her grandmother with a male, much less on a date.  It was such special times that she thought often of them now that she was grown and on her own now.  Much like her grandmother was at her age.  In fact, her grandmother had lost her husband at the same age she had.

It left her to think on her darkest of days that she might be left to be alone forever as her grandmother had been all those years ago.

As she thought of her grandmother, herself and the similarities she couldn't help but wonder why things were the way they were.  Surely you are not meant to be alone if you are so full of love that you are love?  To die alone seemed to be the biggest travesty of all.

She wasn't sure but she would ponder such things as she opened the tin lid of her grandmothers sewing box.  She would close her eyes, bring her nose to the opening and smell - to remember it all.

Email Post
Labels: grandmother Moments
Nicki
Cook, Eat, Travel, Play and Designing Spaces for Kids is Happiness and What I Do Best!