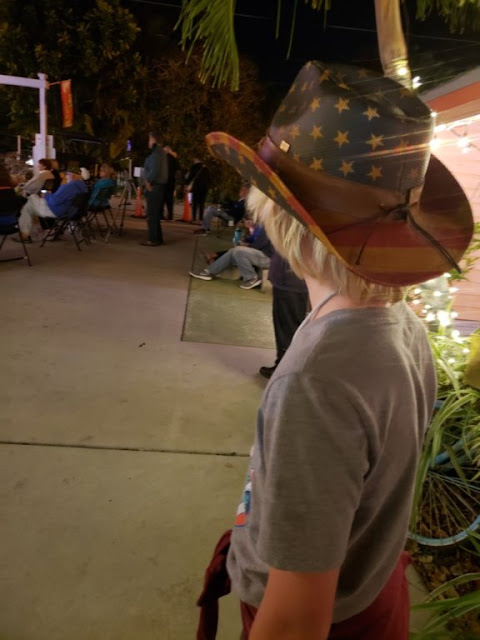 Most of the time in this little town there is a art fest/fair  held weekly.  We go just to be a part, smile and talk to the artists even though we very rarely can buy anything.  They have music and we like being a part of the community.  At this point we always see people we know who stop us to chat.  Some I don't know, they just recognize us from here or there.  It's quite lovely. 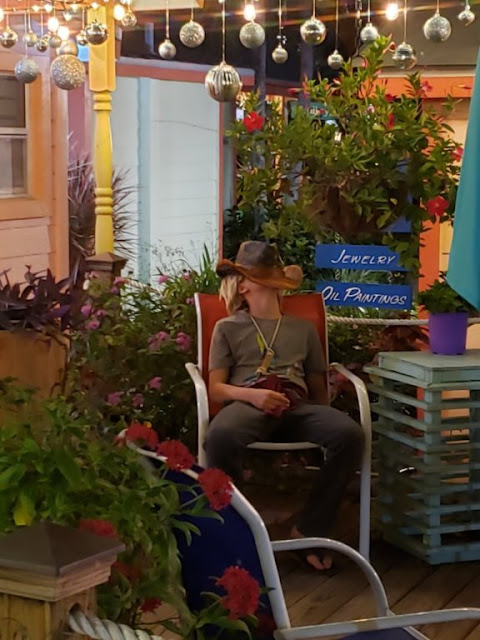 One of the artists, or more he's a vender - the hat man.   There is this cowboy hat with the American flag imbedded into the material of it.  It screams - yee yee, if you ask me.  My son has looked at it every time we go since before the holidays.  I am always broke and I thought he's get over wanting it, as most children and adults, for that matter usually do.
He has not gotten over it.  He brings up the hat on a regular basis.
Tonight we dressed warm and went to the art fair and there was the hat man right were he usually is.
My son picked up the hat and put it on.  He already knows it fits.  He just wants to make sure he hasn't grown more.
I smiled and said softly "you look like your daddy" and that he had a hat like that at about your age.
I had said this very quietly where no one but my son heard.
We smiled and thanked the hat man for letting us look.  An older lady had been asking about a hat of her own - a visor, I think.  She never said a word to us and I don't remember her noticing us.
We walked down to the street and over two streets back to the music area.  My kids and I were listening to the music and enjoying it, as always.  I heard someone talking to my son and I turned around and the lady had somehow found us and told him to come with her.   We followed along and she told the hat man to make sure my son's hat fit.
After this woman was sure that his hat was the right size and he had a bit more room to grow she told the hat man she wanted that and her visor, of course. 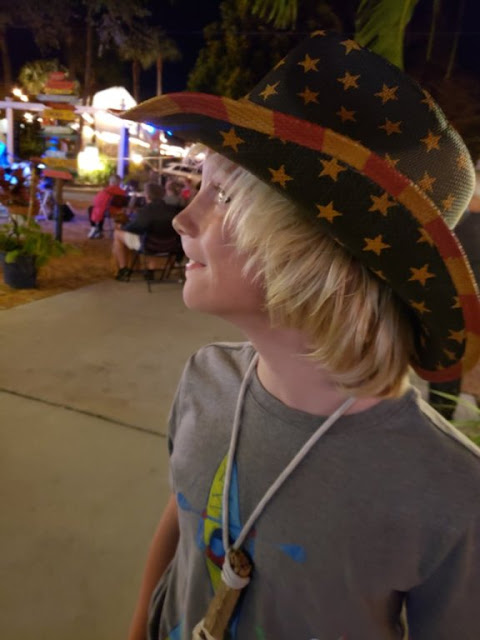 goofy looks, his arrowhead knife and hat
This woman looked my son in the eyes as I stood there behind him a bit taken back that she had sought out my son to give kindness to.  She said that God told her to get the hat for him and that she never ever ignores God.
She reiterated this to my son and talked to me for a bit.  She was so happy and full of joy.   Her and her husband's children are grown.  She also said all the best birthdays are in February and gave my daughter beer money for her big birthday this month.
We said our good byes and lots of thank yous and we parted ways. 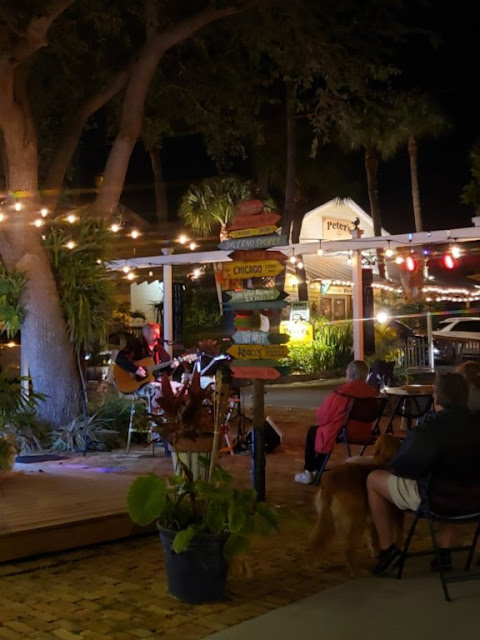 Now what this women may never know is that when the kids and I got back to the music area, the musician immediately started playing Country Roads by John Denver.  I stood there with my eyes wide open in awe.  Tears came to my eyes as I realized the significance of what just happened.  All the signs.
I am big on signs.   I had prayed that very morning about what's true, what's not, my purpose, what I'm doing, what I'm doing wrong (there's a lot of that) and mostly about God.  I prayed. 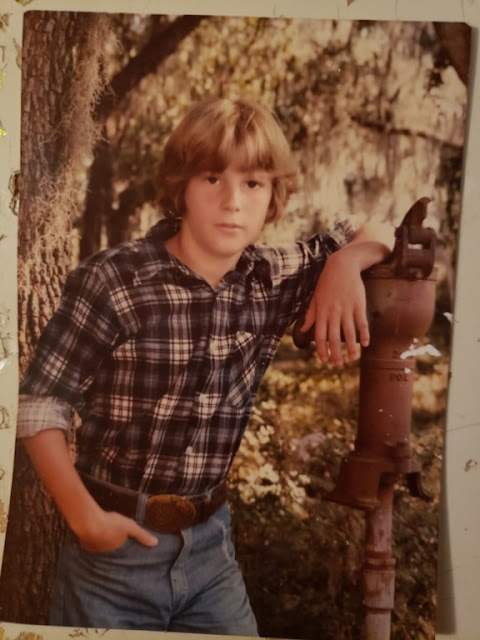 his dad at about twelve.  My son saw this and said they have the same hair.
(my son loves his wild hair). Same hands & freckles, as well.
She will also not know that the knife that my son wore around his neck this very evening, he had spent hours upon hours making just yesterday into last night was made from an arrowhead he had cut off of something of his dads.  He had my permission to cut it off, as things are meant to be used and enjoyed.
This act of beautiful kindness given from this woman because she was called to do so from God.
How many kindnesses never know the impact?
Be kind lovelies, for you will change the world.
- intentionally, Nicki
This...
Here is the post Country Roads that I refer to.  The part...about are you watching...that part specifically.
Now I know why the man played Country Roads tonight.  Because I asked...are you watching.  My God.
Email Post
Labels: Boy Mom Country Roads dads Growing Up in America John Denver Raising Sons Single Mom Starting Over
Nicki
Cook, Eat, Travel, Play and Designing Spaces for Kids is Happiness and What I Do Best!